Mr PEDERICK (Hammond) (15:30): I rise today as the member for Hammond and the shadow emergency services minister to talk about the flooding—and I will use the word 'flooding'—in the Murraylands and Riverland of this state.

I have had the privilege to see the many, many thousands of tonnes of earth that have been put in place and are being put in place as I speak. We look at the major levee banks at Renmark, essentially an island built under the 1956 flood level, and the major work that has happened there, and at Cobdogla, where there is equipment from all over the state, including a grader I noticed from the Mount Remarkable council area, assisting to build a major levee bank.

I note that at Blanchetown they have been left to their own devices, with their caravan park and the Paisley community there, but I also note the positive attitude the caravan park owners are taking in dismantling buildings and other facilities and getting them off site. I look at the major work that has been started at Mannum both by the council, and sanctioned by the government, and by the private operators at the Pretoria Hotel to protect their businesses and properties.

At Mypolonga, I managed to work with the chief executive of the environment department, John Schutz, to make sure we got access to clay pits so that work could go on there on levee banks to assist the town. At Toora, sadly, I saw a levee bank that looks as if it is going to let go because it is already collapsing and will only survive a 180-gigalitre flow. At Murray Bridge, I talked with the council and worked with the SES to make sure we got the DefenCell sandbags in front of both the rowing club and the community club, and at Jervois I inspected the banks that should stand a flood of 240 gigalitres a day.

As the local member representing some of the communities that have been and are going to be impacted by the flooding, I have been inundated with inquiries from worried constituents. The biggest concern my constituents have is with the lack of communication about what is happening. We have known about the possibility of severe flooding for months but, just weeks out from the peak hitting people, we still have no idea what their situation is going to be.

I have had numerous emails and phone calls from constituents and businesses wondering whether their power or sewerage is going to be disconnected and how long they have to prepare for it. I have had people wondering if alternative access routes will be created when the roads to their properties are under water. I am trying my best, with my staff, to get answers for all the constituents who have contacted me, but there seems to be a lot of uncertainty and mixed messages out there.

Even just today, one of my constituents at Younghusband contacted my office to say that SA Power Networks rocked up to his property to turn off the power for his pumps with no notice. This lack of communication is absolutely disgraceful when we have been told that between two and seven days' notice would be given to people. He could have watered his crops more.

People deserve to be given a heads-up on when these services will be cut off so that they can at least have time to organise themselves. Just today, I was also contacted by Foodland in Mannum, as they have heard nothing from SA Power Networks about whether their power is going to be disconnected, and they are going to be protected by a levee and are right up behind the main street.

Throughout all this, though, we must take the time to express our appreciation for our vital emergency services personnel, who have put in an incredible amount of time and effort in preparing for this flood event, including some guys from West Torrens I met, who had come down to assist with sandbagging with the SES at Mannum. These efforts include holding information sessions.

I want to compliment the people from multiple departments putting on these information sessions. They are doing fantastic work, including Chrissie Bloss from the Department for Environment and Water. Their efforts also include organising sandbagging events, providing flood mapping and resources and just being available to assist community members with their flood preparations.

I want to acknowledge some of the chiefs of departments: John Schutz, Department for Environment and Water, and David Ryan, SA Water, who I must say are doing their best to knock on doors—because there has been some misinformation, I believe, sent to homes around Mannum—to get the right outcomes with sewerage and water cut off; and Chris Beattie, State Emergency Service, and Alex Zimmermann, the emergency coordinator, who I contact directly and continuously by either phone or text and we update each other, and I appreciate that coordination. I also want to put a shout-out, acknowledging they have had their problems, to Paul Roberts and the SA Power Networks crew. We all have to get this right for the communities of the Murraylands and Riverland. 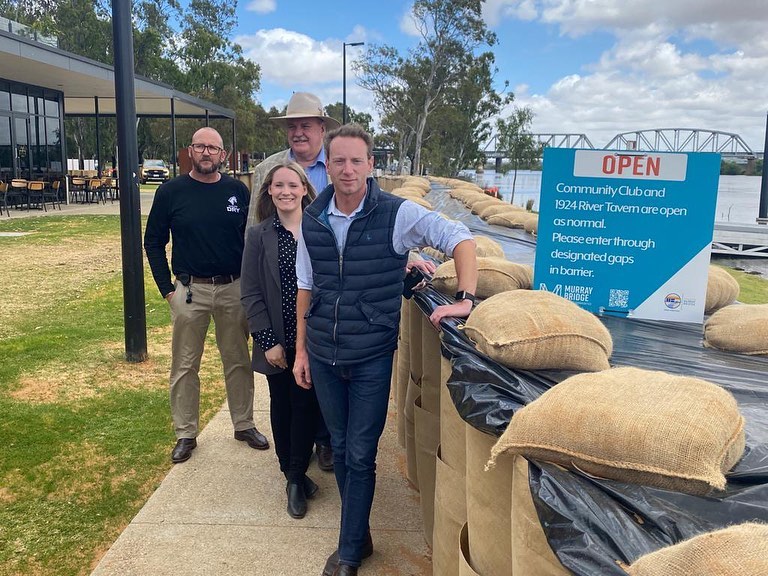