Mr PEDERICK (Hammond) (15:29): On Saturday 12 November, South Australia experienced a very severe statewide storm. Strong winds took down numerous trees, resulting in vehicles being smashed, roads being blocked and damage to over 300 powerlines across the state. Other infrastructure was also damaged in the storm.

Many buildings in the City of Adelaide had water coming through the roof, while a transmission tower just 20 minutes from my place at Coomandook got taken out near Tailem Bend. Around 143,000 lightning strikes were recorded across the state, and there was chaos on the roads, with multiple traffic lights in the city out of action. Also, 163,000 homes and businesses have been without power for various periods of time, some having power returned on Saturday while others have been forced to go without power for up to a week.

SA Power Networks staff and other contractors have been working 16-hour shifts to repair fallen powerlines and get electricity back to all homes and businesses, and they have had to call in reinforcements from interstate to assist with these efforts. We are thankful for the amazing effort of SA Power Networks in restoring electricity. We also need to recognise the incredible work of our State Emergency Service, the Country Fire Service and the Metropolitan Fire Service over this time.

In the 24 hours following Saturday's storm, the SES received more than 1,500 calls for help for incidents including downed trees and flash flooding. Over the past days, our SES personnel, our CFS personnel and our MFS personnel have taken time out of their daily lives to respond to hundreds of incidents and help with the clean-up effort. This is at a time when a lot of human resources are being directed towards ensuring home and shack owners along the full length of the River Murray are prepared for the impending flooding from high river flows.

For residents along the river requiring sandbags and advice on sandbagging, I have been advised just recently that this Friday, tomorrow, through to Monday 21 November 2022 from 9am to 3pm sandbag deployments will occur at the Blanchetown Sports Club on Onslow Terrace, Blanchetown; at the Mannum Football Club in Hammond; at 45 North Terrace, Mannum; at the Bowhill Community Centre at 88 Weber Street, Bowhill; at the Murray Bridge Showgrounds, again in Hammond; at 113 Old Princes Highway, which is the showgrounds at Murray Bridge; and at the old Glossop High School at 535 Old Sturt Road, Glossop. Sadly, with sandbags in short supply, as has been indicated in the last couple of days, only 20 bags per household will be available.

While I am on my feet, I would like to congratulate the town of Mypolonga (Mypo as it is known locally) on being awarded the Agriculture Town of the Year for 2022. The other finalists were Crystal Brook, Kapunda, Orroroo and Waikerie, and they all did an outstanding job. Mypolonga is a small rural town in my electorate, located 15 kilometres upstream from Murray Bridge on the River Murray, with a modest yet mighty population of just over 500 people. Mypolonga was settled as a soldier settlement area after World War I and has a strong RSL sub-branch to this day.

The town is perhaps best known for producing dried stone fruit, and I certainly recommend trying some if you have not already. Some of the other great produce coming out of Mypolonga include cheese, olives, olive oil, citrus, wine grapes, buffalo and cows' milk, jams, chutneys and gin. The town has a fantastic primary school. It is also home of the Mypolonga netball club and the mighty Mypolonga (Tigers) Football Club, which has had some great success in the River Murray football league over the years. This is the second year that Mypolonga has been a finalist for ag town of the year after narrowly missing out to Kimba in 2021.

Just quickly, I want to congratulate some of the winners in Hammond in the 2022 South Australian Tourism Awards. On the night, there were two Hall of Fame inductions and over 30 category winners across the state. In Hammond, in category 12, Tour and Transport Operators, gold went to Juggle House Experiences, Kelly Kuhn—great work; and in category 16, Tourism Wineries, Distilleries and Breweries, gold went to Kimbolton Wines in Langhorne Creek—great work. Monarto Safari Park won gold in category 2, Tourist Attractions; category 26, Excellence in Accessible Tourism gold; and category 30, Voters' Choice Award (Experience and/or Service) gold.

In the last few seconds, I would like to acknowledge the Follett family and all their team out at Langhorne Creek at Lake Breeze. They attempted to put on a huge Handpicked festival on the weekend. Sadly, when 25 millimetres of rain was predicted, 65 millimetres landed in a hurry and closed the festival. They had 7,000 people coming. I got there late in the day and there were a few sorrows getting drowned. I wish them all the best in the recovery and the further staging of that event so they can welcome big bands like the Hilltop Hoods once again. 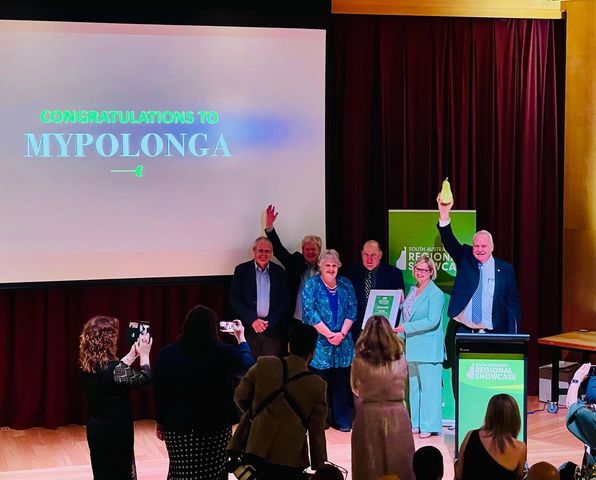